I’ve been noodling something since I recently undertook an unschooling trip with my family to Costa Rica and started working for SMART Technologies. It’s an intriguing insight on unschooling, and a telling insight about our digital native children.

The biggest challenge for teachers is engagement.At some level, it isn’t terribly surprising, especially if you have seen classrooms where teachers, often alone, have to manage a class of an ever growing number of kids with a wide range of learning styles and aptitudes. This isn’t about teachers. It’s about where we are with traditional education. Add in digital natives who are very comfortable with tons of streaming content on various screens and instant information gratification and you have a perfect storm for why engagement matters more than ever.

But engagement seems like such a low bar. What about interest? What about learning? What about mastery? To me, engagement is the lowest level of outcomes to achieve in education. This is what got me noodling.

I like to try to make sense of things by diagramming them. I often use a simple 2×2 matrix to do that because it forces me to really distill the key aspects. Here was my start at noodling over this problem. I don’t claim pedagogical expertise or correctness here earned from years of teaching here. It just helped me better understand the situation for my own unschooling purposes and hopefully will provoke some thinking by others. 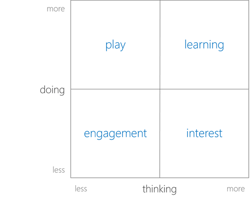 Generally in such diagrams, the lower left is not a good place to be. The upper right is. In this case, the model I was thinking about was how kids learn. I simplified it into learning by thinking and learning by doing. Most kids, and adults, use a combination of course. Some kids, like Aidan, my son, may start out just trying things (doing). It’s especially the case with technology. I’ll call that play (more doing, less thinking). Other kids may start with more thinking and less doing. I’ll call that interest. When you put them together, you get learning in the upper right. It’s a bit like the Chinese saying:

I hear and I forget.

I see and I remember.

I do and I understand.

So, if you take the goal as getting to learning, what helps kids with more doing or more thinking?

How You Get There

I boiled it down into structure and tools. Give a kid a tool, whether a hammer or a computer or something else, and they’ll inevitably start playing with it. It’s a great start. Some kids thrive in this space and keep playing until they get better at it. Other kids need a little more help, which is where structure comes in. Also, just playing with something to eventually land on how to use it well isn’t terribly efficient.

Now take the converse. Some kids like to start by reading about or “studying” 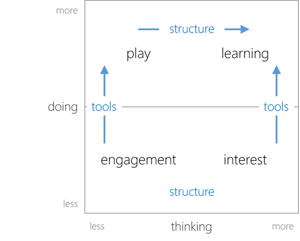 something. (Those kids may grow up to be people like me who reads the manual first! :-) ). It certainly helps, but it can remain academic unless and until they actually try doing something; i.e. using a tool.

Take math for example. You can spend lots of time doing multiplication. Eventually you may notice some patterns that lead to higher level math. But some structure certainly helps. Or, you could read a lot about how to do multiplication, but it’s hard to “get it” until you actually try to do it. All of this is really scaffolding. Jerome Bruner used scaffolding to describe the support given during the learning process, tailored to the needs of the student, to help them achieve their learning goals.

Scaffolding works well, but it’s hard to do when you are struggling to achieve simple engagement. It must also be a huge challenge with digital natives and the sensory explosion they’ve been exposed to since birth – unlike, for example, children at the time our first models of classroom education were developed. Now, outnumber the teacher with many students in a large class and you can see the perfect storm.

In contrast, engagement tends to be less of an issue in unschooling for a few likely reasons. First, there’s usually an adult around who can help when needed and knows the student well. When students have a hand in choosing what they want to learn and how to learn, it’s certainly makes the process easier. The challenge is that most of us doing unschooling aren’t fully versed in all the best ways to help our kids with tools or structure, when they need it.

As I looked at all of this, I kept noodling about engagement. If engagement was the biggest challenge in many classrooms and something desirable to achieve, then it should be in the upper right corner.What, then would be in the other quadrants?

The Road to Engagement 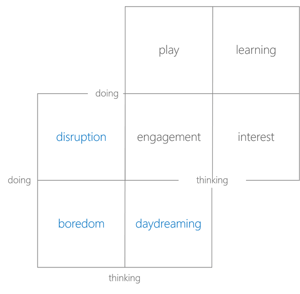 I started with boredom as the “lowest” state, sitting in the unenviable lower left quadrant. Unstructured thinking to me represents daydreaming. It’s not bad in itself, and indeed can be the source of great inspiration, but it doesn’t help the learning process or the teacher. On the flip side, and I know it may be a provocative term, but unstructured doing can be disruption (certainly more to a teacher than a student).

Now, put anything with a screen, including a SMART Board interactive display, near a digital native, and you can see how engagement might occur. Many classrooms still prevent students from bringing in smart phones, tablets or computers or severely limit their use. Here’s where I’ll share some very “off path” thoughts.

To a digital native, devices with screens – and truly, it doesn’t matter the form factor – are their core tools. They are almost extensions of their body. We may not want to admit it, but it’s true. Is it really so different than pencils and paper were to those of us who are not digital natives?

One can argue that they can be a source of distraction or a means for teachers to lose control of a class. I’d argue two points. First, paper and pencils can also be a distraction to a (non-digital native) student who is bored. For example, you could tell which high school and college classes I was bored in (even meetings I’ve been in at work!) – by looking at my notebooks. I drew detailed sketches, wrote song lyrics, generally found lots of creative ways to be distracted.

More importantly, while any tool can no doubt be sources of distraction – and I think all of us as parents have struggled with this – they can also be sources of incredible power and motivation for learning when used well. There are a number of schools that are allowing some devices in now and harnessing them as part of the learning process. I recently saw one example of a grammar school in Kent where the students each had a Surface Pro and the class had a SMART Board. There was one teacher and 20 students. Sure, it was chaotic at times with some daydreaming and disruption going on to be sure. But if I imagine that class of digital natives without the devices, I’d expect things to be far worse. And indeed, she wasn’t just achieving engagement. She was getting some interest, some play, and a good deal of learning as well.

Of course, as Ben Franklin remarked, “Everything in moderation.” Being plugged in all the time can certainly be unhealthy as well. We’ve had our share of discussions/arguments with our own two digital natives growing up with screens and trying to be responsible about screen time. I think digital natives fundamentally embrace technology differently. It is intertwined in their beings and they find ever new ways of using it. While I might be different, I do understand their habits and needs – well at least a bit in this respect at least. I might consider them a little “off path” compared to me and many of us non-digital natives, but then after uprooting and living in Costa Rica for a years so that my kids could have an experience in a different culture, many would consider all of us “off path.”

PS: For the record, having taken my “noodling” below the threshold of engagement with my diagramming, I also had to noodle on what “lived” above learning.

I see a “doing” path going from learning to experimentation. You might think of it 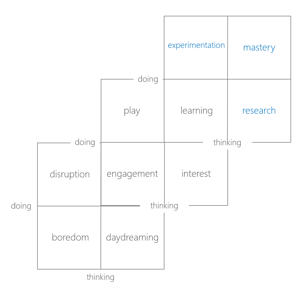 as a deeper level of play, but a highly structured one and generally very goal directed. Some of the best constructivist learning principles follow this route. On the other side, I see going down a thinking path from learning leading to research. I know that word can have a lot of meanings but here I see it as a structured knowledge pursuit. When you combine the two, you can get to mastery. Malcolm Gladwell in his book Outliers notes that it takes about 10,000 hours in a skill/field to achieve mastery. Very likely, it requires both thinking and doing to some degree.

I wonder if, armed with the proper tools, digital natives, at least in some areas, can achieve mastery more quickly. I’m an optimist. I would like to hope so. The amount of information is growing at staggering rates. According to IBM in 2012, “90% of the data in the world today has been created in the last two years alone.” Our digital natives growing up in a world with increasing challenge, complexity and information will need all the help they can get.