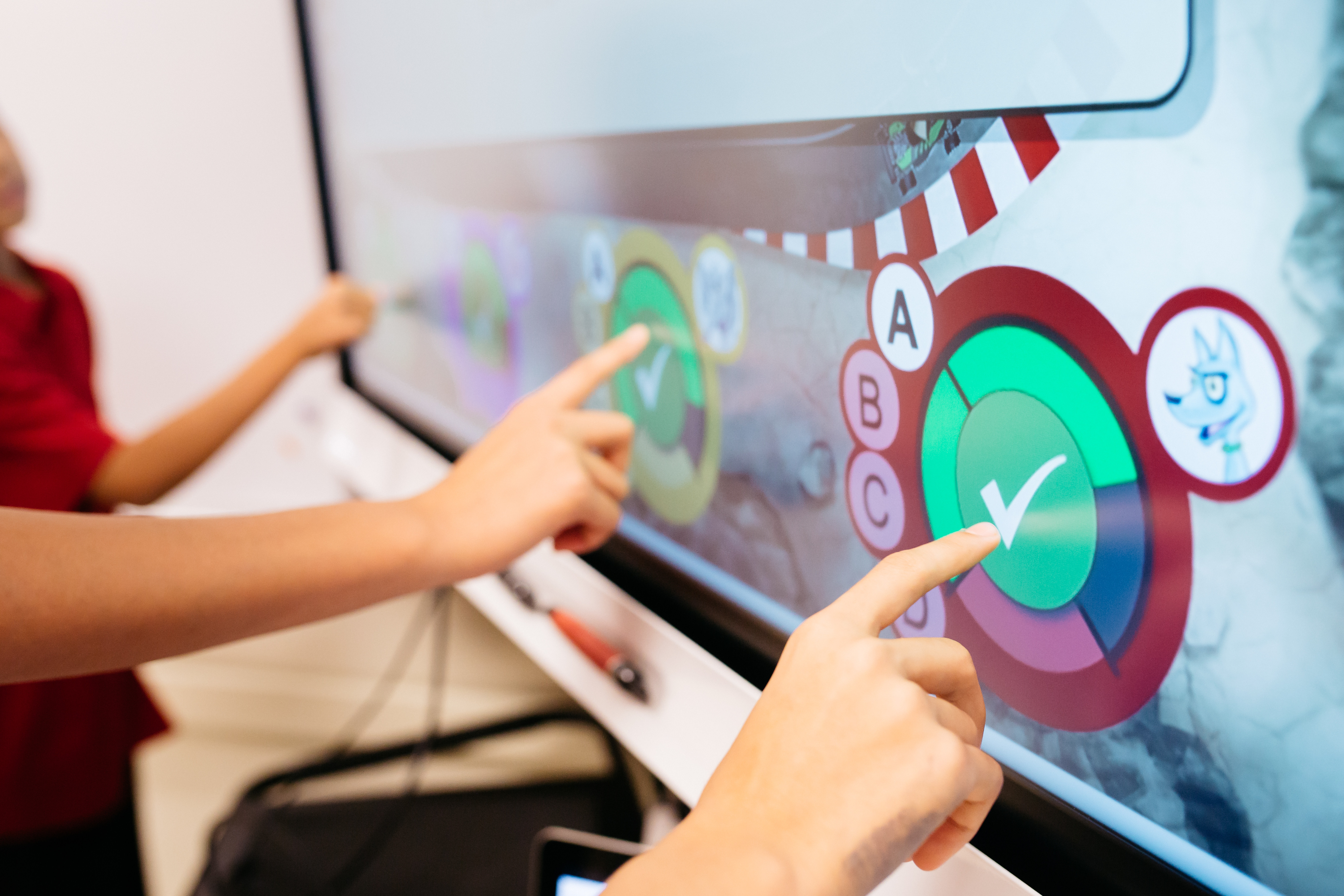 Gamification vs Game-Based Learning - What's the Difference and Why Does it Matter?

In my last blog post, I talked about game-based learning and how to bring it to classrooms at scale. This time I wanted to differentiate gamification and game-based learning, and focus a little more deeply on why they are valuable in education.

Gamification uses techniques (game mechanics) from games, such as achievements, leader boards, etc., to provide a more engaging and often fun user experience in the classroom. A recent OECD report highlights gamification and the value of play as one of 6 core pedagogy innovations that has the power to help shape and change education. Teachers can use gamification in their classroom to increase engagement and motivation across the entire learning experience.

Game-based learning on the other hand, embeds learning directly within the rich environment of a game. Learning comes from a student actually playing a game rather than participating in classroom or other activities that have been gamified.

Now let’s take a deeper dive on each.

There are a few good definitions for gamification out there. I like Gabe Zicherman’s definition:

“Gamification is the process of using game thinking and game dynamics to engage audiences and solve problems.” (gamification.co)

The behavior that this can drive, pretty simply, is an interest in learning.

There are some great examples of teachers gamifying their classrooms and the success they’ve had. An early example is Ananth Pai. He’s the educator that brought gamification directly into his Minneapolis classroom and took a failing third grade class and increased their math and reading scores incredibly, surpassing other grades and other schools. His story, and his success, is inspiring.

Then there’s Bob Young, a second-grade teacher who gamified his math lessons with SMART Lab’s Monster Quiz. He achieved a 55% increase in addition facts, and a 69% increase in subtraction facts. Todd Davis did something similar in his fifth-grade math class and boosted performance 24%. Tammie Schrader takes this even further as the Regional Science Coordinator in the Stater of Washington. She helps educators in 39 school districts gamify their science classrooms in a variety of ways.

In game-based learning, players learn by playing a game – digital or analog. The content and game mechanics work together to facilitate learning.

I discovered the power of learning through games while in graduate school at the Institute of Design. I had a profound but simple insight that came when I was observing kids playing arcade games.

I had a project where we had to teach a chapter of a science book to middle schoolers in inner city Chicago using interactive media. Many of these kids could not read and the vocabulary of the textbook was daunting for them. I chose to focus on the immune system. The vocabulary in this chapter was particularly tough and few kids even wanted to read it. It wasn’t “coming alive” for them.

I didn’t know these kids well and so as part of my design process I went out and researched what they liked to do. At the time, Mortal Kombat was a popular standup arcade video game and these kids were all spending a lot of time playing it. They had such deep and thorough knowledge of these video game characters. They told me things like:

“…if you want to defeat Scorpion when you’re playing Sub-zero, and Scorpion throws his ‘air throw’ move, then you need to counter with ‘cold blast’ and then…”

I was stunned. There was not much difference between that and real immune system interactions. For example:

“…if you want to defeat Streptococcus (a bacteria) then you need to use a B-Cell, (not a Killer-T Cell) and have it shoot antibodies at the bacteria so that complement (cellular dynamite) can attach to it and blow it up…”

I created a prototype of a video game where the kids could play different immune system cells (“characters”) and defeat various types of germs. In doing so, they’d focus on all the key immune system interactions and the vocabulary would come as part of the game.

They learned how the immune system worked through interaction, play and active participation vs. passive reading and watching. And they were able to go beyond middle school material and learn college level immune system mechanics.

There is an abundance of research from organizations like the American Psychological Association, The Joan Ganz Cooney Center at Sesame Workshop, and Massachusetts Institute of Technology that points to significant cognitive and non-cognitive benefits from using games and game-based learning in the classroom.

We’ve likely all seen the incredible engagement many video games create. There’s a simple behavioral process at work in us that’s not tied to games per se: challenge, achievement, reward. Simply put, when we encounter a challenge and accomplish a goal, overcome an obstacle, etc., we are rewarded with a small release of dopamine. It’s a brain chemical tied to motivation and reward and when our brains release it, we feel good. And we want more. So, we try to do whatever it was that produced the dopamine again.

Games, particularly video games, create a succession of different challenges that can be “achieved.” Unlike many things in the physical world, you can do these a lot more frequently and get that dopamine effect more often.

Great games also allow players to discover the rules and strategy through experimentation and play. When those rules involve learning, magic can happen. Portal 2 from Valve is an example of a mainstream game that is one of the best ways for learning collaboration that I’ve seen. At SMART, we are working on a game for players to learn fractions. As players begin to experiment and understand the “rules”, they are really understanding the mathematical mechanics of fractions and how they work.

Fluid intelligence is very different. It is the ability to think logically and solve unfamiliar problems in novel ways. It is a key component of pattern recognition, abstract thinking, problem solving, and quick reasoning, Not surprisingly, it has very strong ties to innovation, creativity, and the ability to effect change.

What is particularly interesting is that you can indeed increase your fluid intelligence according to Andrea Kuszewski. She discusses 5 ways:

It turns out that you can find all of these playing most modern video games. (Thanks to Gabe Zicherman for connecting a lot of the dots here.

Gamification has gone through its inevitable period of hype and while it is still not a mature field, it is still an important trend in general and one that applies beyond learning. It has made some serious inroads into business and it is now a multi-billion-dollar industry according to most reports.

On the flip side, we see schools struggling to keep up with what they have to teach and how they teach it. There are ever-growing demands on what teachers must cover. In many cases they are producing more and more homework and focusing on memorization. Take a look at the heart-wrenching documentary Race to Nowhere (2010) for some sobering reality here.

The focus of schools in most cases is on what to learn; i.e., developing crystallized intelligence. It’s easy, and reasonably non-controversial, to test for after all. Despite some great work by the Partnership for 21st Century Skills, far less time is still spent on how to learn or how to look at problems creatively and solve them in novel ways; i.e., fluid intelligence.

A few years ago IBM told us that ”90% of the data in the world today has been created in the last two years alone”. Now consider that when the current middle and high-schoolers reach the working world in a few short years, much of the “prior knowledge” that they’ve learned in school may or will be out of date.

With the majority of school and after school work focused on developing “prior knowledge,” where is there time for learning how to think creatively and differently about solving new problems? We are giving students fish and not teaching them how to fish.

Whether you believe that the “video game generation” is or will be different than their predecessors, there is no doubt that video games and technology in general are influencing this generation heavily. I would argue that for those kids that play video games, or games in general, there is valuable, and “evergreen,” learning that comes from that play.

Now imagine combining the two approaches. There is still plenty of room for learning “things.” Working with that, we can add new ways to learn – ones that inspire kids and not keep them up late and stressed about their homework and tests. Hopefully they would be better innovators and problem solvers. The world they inherit will need more of that.